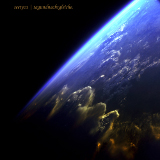 I got an email from seetyca in July. It said: Shalom, and thanks for playing seetyca. I sent back an email, the substance of which was like "you're welcome but how about playing live on my show?"

It worked out well. Rather than him staying up late to fit stillstream's schedule, I did a special edition of the show where he played for two hours in the afternoon. Afternoon in Texas anyway. I then rebroadcast his performance the next time I did my show.

This release then is his remastered version of the set he did for Sadayatana, released as "The Flavour Blue". I enjoyed this immensely and I am sure you will as well.

Primarily this is a download release, but Seetyca gave it to me on a double CDR assuring me that copies can be had as such for those who want it on a better quality. The music is from a two hour live performance, on the internet from last August and sees a continuation of the release I reviewed from him last week: deep atmospheric music of a darker nature, through long pieces of slow moving synthetic ambiences. I assume, but I forgot to ask when I bumped into Seetyca earlier this week when he was working on an audio walk as part of an exhibition called 'Verortungen/Entortungen: Urbane Klangraume' in Leipzig, to ask how he creates his music, but surely this is mostly done through digital processing of sounds, and/or the use of digital synthesizers. Quite spacious music, but more in a traditional sense of ambient music, than harking to the cosmic revival currently going on. An excellent excursion into the dark lands of music, perfectly for a late night play. For the fans of Robert Rich like lengths! (FdW)